In support of Children's Cancer Center. 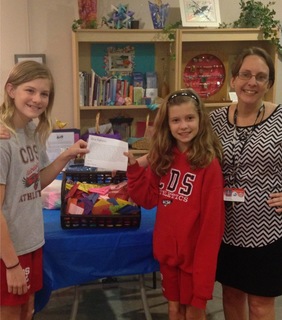 Hello everyone! My name is Isabel Mahoney, and together with Matheson Woeste, we comprise the team, "Anne's Angels". Returning for our fifth annual Gelatin Plunge is an inexpicable joy, as supporting the Children's Cancer Center for the past five years has truly allowed for us to positively impact our community. In addition, plunging for the CCC has provided us with a fantastic outlet to carry on the legacy of our beloved fifth grade teacher, Mrs. Anne Fordyce. Mrs. Fordyce was the kindest, most compassionate, most selfless and loving teacher we have ever had and will ever have. Her kindhearted demeanor and limitless care for those around her allowed her to be a beacon of positivity within our Carrollwood Day School community. During the 2013-2014 school year, Mrs. Fordyce was Matheson and my fifth grade teacher. Prior to our introduction to Mrs. Fordyce, she had suffered from brain cancer, and when introducing herself to us, we learned that she was in remission. At the dawn of our school year, Mrs. Fordyce exuded such a maternal warmth, informing us that her true life's dream was to have a child one day, since her cancer had prevented her from doing so prior. As the school year progressed, we learned of Mrs. Fordyce's passion to aid those suffering from cancer, constantly instilling values of empathy and understanding within her students. When deciding what our community immersion volunteer project of the year would be, we all knew that focusing on aiding victims of cancer was a topic which we had all grown to be very passionate about, thanks to the passion radiated by Mrs. Fordyce. From this point on, our class delved deeply into researching and volunteering at facilities which helped those suffering from cancer, devoting field trips to the Children's Cancer Center, Moffitt, the Hope Lodge, and more. Mrs. Fordyce singlehandedly inspired dozens of adolescent kids to genuinely help and make a change, a feat which many teachers often never reach. The enrichment which we acquired in volunteering at these research and non-profit organizations, serving those battling cancer broadened our perspectives and increased our understanding monumentally. Through our volunteer work and service, our connection with and admiration for Mrs. Fordyce grew, establishing very close bonds. As the year neared a close, Mrs. Fordyce announced to us something life-altering: she was pregnant. Our joy for Mrs Fordyce brought us to tears, causing us to sob out of pure joy for this woman who we so deeply and unconditionally loved. Recognizing that her life-long dream of being a mother had come to be her reality was beyond thrilling. Following our fifth grade graduation, we, along with fellow students continuously visited her classroom, catching up about the pregnancy and simply chatting, as our relationships with her were so tight-knit that they surpassed the borders of our school year. Shortly thereafter, in December of 2014, we were informed of the devastating news that Mrs. Fordyce's cancer had returned. In this same month, early December, Anson Fordyce, her beautiful, healthy, miracle of a baby boy was born. Merely three months later, on March 28th, 2015, heaven gained the angel that is Anne Peluso Fordyce. Mrs. Fordyce's immeasurable impact and affect on our souls and those of our classmates shall remain until the end of our time and beyond. The kindness and joy radiated by this woman has been cherished by her family and friends and shall be forever. Mrs. Fordyce's passion to impart happiness on others and to completely fight for a cure is something which we fully intend to carry on for the rest of our lifetimes. To this day, Mrs. Fordyce fights alongside us within our spirits and souls, as we truly and honestly are Anne's Angels. Please, assist us in carrying on Mrs. Fordyce's radiant and positive legacy to children who she was so devoted to fighting for.

Select a teammate from below to help them reach their goal, or make a general contribution.

The 7th Annual Gelatin Plunge presented by Caspers Company is your chance to make a difference in the lives of the children and families supported by the Children’s Cancer Center.

Join us Saturday, June 15th at the Children's Cancer Center from 7PM to 10PM to plummet down a slide on into a pool filled with 2,000+ gallons of orange gelatin and enjoy live music, food trucks, a beer garden, and family-fun activities. Spectators are welcome to join in the fun as well!

Create a fundraising page and join us to raise funds which will go directly to local families receiving educational, emotional, and financial assistance from the 24 programs provided by the Children’s Cancer Center.

Can't make the Plunge? You can still support the Children's Cancer Center by purchasing a 1 in 100 chance to win a cruise for 2 for 5 nights anywhere in the Caribbean for only $100! Purchase your chance at gelatinplungecruise.com

~ It takes more than medicine to be well ~

Eligibility for the Plunge: